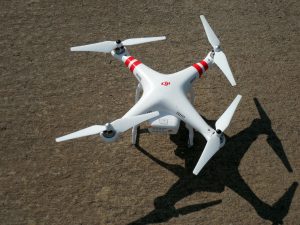 Drone helicopters are increasing in popularity every single year, mainly because of the advances in technology that makes them so appealing but also because they are hitting the market by storm so are freely available. Most drone helicopters are quadrotors, which means that they are lifted and kept up by four separate rotors although you can get some that vary from this. For this reason, many of the designs are known as ‘quadcopters’ which is an amalgamation of the two.

These devices normally use two different sets of propellers; one set of two will go clockwise with the other set going counter-clockwise. This keeps the device stable when in the air and able to quickly change direction in all conditions. Due to the success of the drones, production actually begun on a larger scale version of the quadcopters but ultimately ended in failure. At first, many people believed that a helicopter would benefit from the counteracting rotors instead of the front rotor and the rear vertical rotor (which actually produces little lift and therefore little help to the taking-off process). Many test vehicles appeared around the world in the early to mid-1900s and were, at first, a success and were many of the early vertical take-off and landing (VTOL) aircraft. However, this soon came to an end after many problems including poor and inconsistent performance. Improvement was thought to have been made a few years later only to suffer again as the workload of the pilot became too heavy.

With advancements in technology in recent years, quadcopters have benefited hugely from additions such as cameras, GPS as well as better and more efficient designs that now allow the user to use the drone inside and outside. These devices are now small and lightweight making it easier to carry around as well as fly. Quadcopters have also been used for research into unmanned aerial vehicles (UAV) as a result of their efficiency.

Quadcopters are often cheaper than original remote control helicopters because of their size and their lower cost of production. They are also known for causing less damage because they have smaller blades meaning that they produce less kinetic energy. The risk of any damage can also be further diminished with the addition of rotor protection that is available that will not affect the performance of the drone.

It was at the beginning of the twentieth century in 1907 that the first product of this idea came to light when Louis Breguet designed and built a four-rotor helicopter. Though it only flew a few feet from the ground a couple of times, it is widely seen as the first product of its type. It would take over ten years for somebody else to follow up on Breguet’s hard work when a French helicopter designer built a number of different aircraft. One of which was made up of four rotors and up to eight propellers (which included many clockwise but also counter-clockwise). This device started with small flights but could stay in the air for several minutes by 1923. This was seen as a success thus being the catalyst for all future four-rotor vehicles.