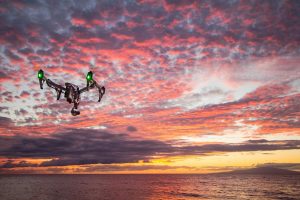 When you ask someone what they think of when you say ‘drone’ they will often head straight towards the military when in fact, the commercial drones market is more lucrative. The commercial drones industry is growing by approximately 20% every single year and the industry has expanded as a result. The introduction of high-quality cameras and efficient GPS coupled with sleek design has meant that more people use quadcopters for recreational use than ever before.

DJI, a Chinese company founded in 2006, is the market leader in recreational drones and is set to hit $1 billion in revenue next year. With a product range that includes the Phantom 3 and the Inspire 1, their products are widely used around the world in a number of different industries including farming and policing. DJI’s devices have also been associated with the solution to many natural disasters as drones can be used to hunt for hurricanes or search for the cause of a forest fire and help to keep the fire under control. Their products now offer customers high quality photo and video recording abilities, efficient GPS systems and application support. An app provided by DJI allows its customers to change settings on the drone to ensure the highest possible picture quality, stream 4k (60fps) video straight to an iOS or android device and access inflight telemetry.

It is believed that by the year 2025, commercial drones could be responsible for billions of dollars in the economy. Over 100,000 jobs will be attributed to the drone market which in turn creates a significant amount of money in tax and there are no signs of this slowing down anytime soon. The industry is booming and that is exactly what a high-investment market needs. The fact that these companies are doing so well means that they are able to reinvest in bigger and better products with even more features which will, in turn, help the market to grow even more. It is a never-ending positive cycle that will not be broken while people have a healthy amount of disposable income.

Could it be long before these drones are being used without any human involvement at all? The US Federal Aviation Administration (FAA) has predicted that in just three years, these drones or quadrotors will be able to complete jobs such as delivering parcels without any human oversight whatsoever. The drone market is constantly changing and the rules and regulations are always changing as a result. For now, drones can only be flown in a position where they can be seen by the user but many industries want this law changed so that they can use the quadcopters more efficiently. For example, a train company wants to know exactly where the rail is broken which can be a tricky procedure if the drone has to be in sight at all times. This is something that the FAA is likely to consider as it can also help to save lives by preventing workers from entering potentially dangerous situations.

With new technologies being announced every single year, who or what is going to stop this unprecedented market growth for the commercial drone market?