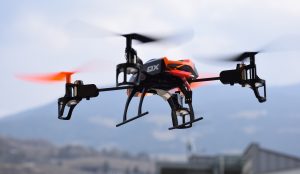 A drone, also known as an unmanned aerial vehicle (UAV) as well as many other names, is a device that will fly without the use of a pilot or anyone on board. These ‘aircraft’ can be controlled remotely using a remote control device by someone standing on the ground or by using computers that are on-board. UAV’s in the beginning were typically controlled by someone on the ground but as technology has advanced, more and more aircraft are being made with the aim of being controlled via on-board computers.

The idea of an unmanned aerial vehicle can be traced back to early in the twentieth century and were originally intended to be solely used for military missions but have since found place in our everyday lives. Reginald Denny, who was a popular film star as well as an avid collector of model airplanes was said to produce the first ever remote piloted vehicle in 1935. Since this date, the aircraft have been able to adapt to new technologies and can now be found with cameras as well as other useful extras. As a result of this, UAVs are used for policing, security work and surveillance and firefighting, they are even used by many companies to check on hard to reach assets such as piping and wire work adding an extra layer of safety and security.

The rise in popularity of these devices has however, brought some negatives as well as positives as new rules and regulations have had to be introduced to control the situation. As the UAVs were getting stronger and technologies were improving, it meant that they could fly higher and further away from the operator. This has led to some troubles with airport interference all over the world. In 2014, South Africa announced that they had to tighten security when it comes to illegal flying in South African airspace. A year later and the US announced that they were holding a meeting to discuss the requirements of registering a commercial drone.

As well as the previously mentioned uses, drones are now also used for surveillance of crops, counting animals in a certain area, looking over a crowd among many others. Drones have managed to change the way that many industries are run and have also allowed many businesses to become more efficient. Drones have also helped to increase safety and also contribute when it comes to saving lives. Forest fires and natural disasters can be monitored and the drone can be used to alert the relevant authorities of anyone that is in trouble and in need of help. The exact location of these events can also be found with ease.

Drones have also become a hobby for many people around the world. In the US, recreational use of such a device is legal; however, the owner has to take some precautions when attempting to fly. The aircraft must adhere to certain guidelines that have been laid out; for example, the device cannot be more than 55 pounds. The drone should also avoid being used in a way that will interfere with airport operations and if a drone is flown within five miles of an airport, the airports traffic control tower must be made aware beforehand.