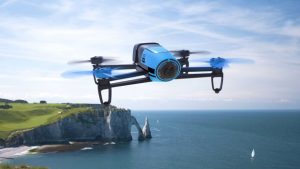 Parrot is a company based in France that has completely changed the game when it comes to remote controlled aircraft. They have produced a drone that is propelled and kept up with no fewer than four rotors (quadcopter) that is operated using the latest mobile and tablet technology. The Parrot AR.Drone allows the user to control the vehicle using an application that can be found on both android and iOS; there is also other software available for other phones/tablets.

The first version to be released by Parrot was the 1.0 in 2010. It was shown off to a large crowd at the consumer electronics show in Las Vegas during a demonstration using the relevant mobile application. The device was a little over 22 inches across and was made up of mainly carbon fibre and nylon. The device included detachable hulls that could be changed according to whether you were flying inside or outside. The indoor hull provided the blades with extra protection via foam coverings reducing the likelihood of causing permanent damage. The outdoor hull was different to this in that it was made of plastic and allowed for easier movement.

Two years later, the 2.0 version was released at the same event in Las Vegas. Parrot decided that they would focus their attentions on improving their successful first version rather than building a new design from scratch. As a result, the sensors became more sensitive and therefore easier to control and the camera was upgraded to a higher quality picture. The device also became more stable in flight due to an air pressure sensor. Other parts to the drone were also upgraded such as the Wi-Fi hardware which allowed for a smoother and more controlled flight. At the consumer electronics show in 2013, Parrot unveiled an add-on to the drone which provided the user with extra storage as well as GPS navigation making it the best product to date. This added piece of technology will allow the user to mark out checkpoints on a map that the drone will follow. At the same time, Parrot also announced a new battery that was said to increase its life and therefore flight time by up to 50%.

In 2010, the Parrot AR.Drone won the award for ‘electronic gaming hardware’ at the consumer electronics show’s innovations ceremony and nearly 500,000 sales have followed to this day. Much praise also came in for the second release for its ease to learn compared to the first release which took a lot longer to become adequate at flying. Since its introduction, Parrot’s drones have been widely used including at sporting events to increase coverage as well as for streaming other events. One man even attempted to live stream the pictures from his drone of the Wall Street protests to viewers from around the globe. Directly from this, he has begun development of installing a 3G device inside the drone that will allow for connection via the internet that would mean a much wider reach rather than using a Wi-Fi point nearby.